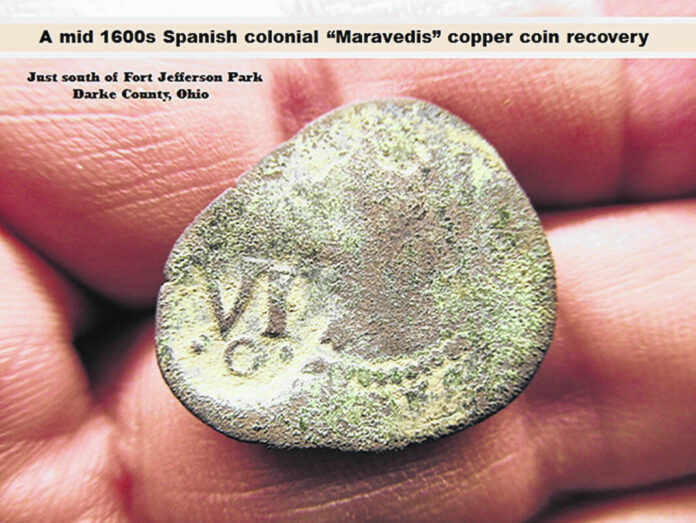 GREENVILLE – On the weekend of October 28, the Friends of Fort Jefferson and Wayne’s Legion Search Party organized a search of the field immediately south of where Fort Jefferson once stood. The project was open to the public and attracted many interested historians and novices, some from as far away as Columbus and Indianapolis. Several artifacts have been recovered and cataloged, each giving us another piece of history that makes up Ohio’s forgotten outpost, Fort Jefferson.

The land on which the excavation took place was purchased from the Denniston family following their gracious allowance of digging activities to begin on the property in previous years. Prior to the excavations themselves, it was decided that the fence bordering the site of the fort would be the focal point of the excavation. Accordingly, the area immediately south of the fence was measured into 17 sections in order to keep track of where the relics were found once excavations began.

Several artifacts were recovered during the two days of excavation, scattered both in the area organized in a grid and in the rest of the field. Although they are all significant additions to the history of the fort, no singular gives any indication of specific events that took place at the fort. Further studies and research are needed before any explanation for their presence can be

Two significant artifacts that were found during an initial detection scan were a Spanish Maravedis coin and a crumpled collar plate from vintage neck stock. The coin was found near a natural spring located in Section 13 of the grid and, having been minted in 1636, would have been in circulation nearly 100 years before George Washington was born. Therefore, this Maravedis coin predates the fort and may have come to the area through trade with Native Americans.

The second significant discovery from the spring 2022 scan was that of the crumpled collar plate in section 2 of the grid. This collar plate is said to have been used to fasten the butt ends of a soldier’s neck during the fort period of Fort Jefferson. It is theorized that these plates were discarded by the men because they were uncomfortable to wear during the long hours of hard work that were required of soldiers on the Ohio frontier.

During the excavations, a third important find was recovered: a sling buckle. This unassuming slingshot loop has a unique use and interesting origin. Sling loops such as the one found at Fort Jefferson were made during the Revolutionary War and after the war ended they became surplus. These surplus sling loops were attached to a bandolier for use by soldiers on the western Ohio frontier.

Other discoveries during the Fort Jefferson excavations included fallen mucket bullets, fired bullets, buckshot, cufflinks, and lead fragments. A Spanish real coin dating from between 1770 and 1790 was found at the far end. A hearth was also discovered and dug in the 9′ grate section.

A careful sifting of dirt removed from this hearth revealed fragments of bone, raking and charred wood. A broken piece of a French flint was found nearby. It is difﬁcult to determine the period from which the hearth originated because it could be historical or even prehistoric. The significance and implications of these findings will be explored later.

A final artifact, one that was found by a young audience member, Levi Olson, was that of a comb fragment. The comb’s exact period of origin is currently unknown, but it was estimated on the spot that it may have come from Ft. Jefferson’s time period. Whatever its origin, the discovery is a perfect example of how enthusiastic public involvement continues to help reclaim Fort Jefferson’s forgotten history.

After such a successful weekend, it’s no surprise that Wayne’s Legion Research Group and the Friends of Fort Jefferson have already cultivated plans to continue working in the area next summer. On the east side of Sectionl of the current dig site, between the pines and State Route 121, there is another unexplored area that was purchased along with the rest of the property. This area was part of where Arthur St. Clair’s army was encamped when the fort was originally built. Although no date for the next dig has yet been released, we look forward to seeing what will be uncovered at Ohio’s Forgotten Outpost.