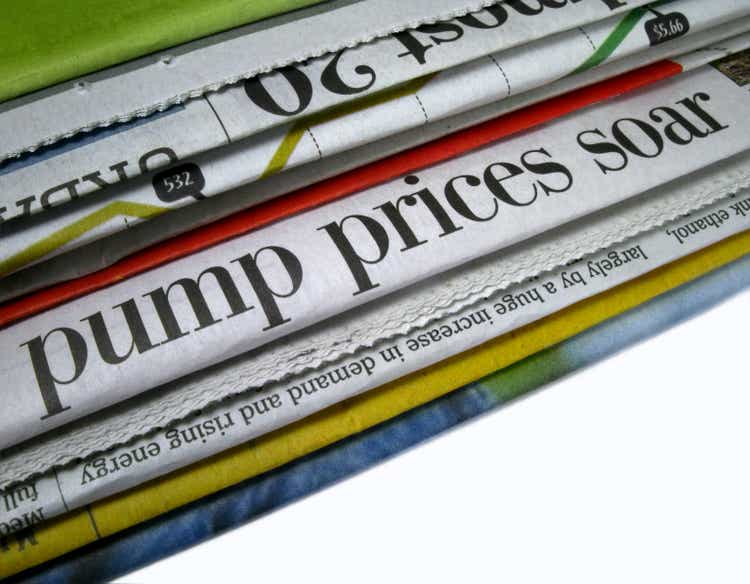 Midstream was hammered out of the gate this week, falling 7% on Monday and even lower until Friday when a 4% rally recouped some of the week’s losses. Midstream ended the week down 3.9%, down 1.5% than the 2.4% loss of the S&P 500.

The week marked the seventh consecutive weekly loss for the S&P 500. During this period, the midstream held up relatively well, as seen in the chart below. The sector has been one of the few refuges in brutal market conditions.

On the commodities side, WTI was also volatile over the week but ended up 0.7%, while natural gas fell 4.5%.

As the industry’s earnings season draws to a close, it’s been a quiet week for company-specific news. Intermediate fundamentals remain unchanged from the previous week, and we view this week’s decline to be related to broader market movements, as opposed to any deterioration in fundamentals.

where there Been News

The most pressing developments for the midstream sector came not from the financial realm, but from Washington, DC, which continued its assault on the oil and gas industry.

The #1 piece of dumb political moves this week came on Wednesday when the Biden administration canceled plans to auction drilling rights in two areas of the Gulf of Mexico and one area off the Alaskan coast. Equally concerning was that the Home Office offered no new lease sales. As a result, it could be several years before the oil and gas industry is awarded an auction of federal offshore concessions.

This is another administration move that will hamper the industry’s ability to source domestic supplies. Canceling permit auctions ultimately hurts oil and gas investment, as it cuts off avenues for growth and thus incentivizes industry players to focus on maximizing the profitability of their existing assets. The move also sends a clear message to the industry that political and regulatory forces are aligned against it, further discouraging industry players from making the long-term investments needed to increase supply.

Exhibit No. 2 of Washington’s dumb moves came Thursday when House Speaker Nancy Pelosi said Democrats would introduce a bill next week aimed at halting rising gas prices. The invoice is reported to allow the President to employ administrative measures to make it illegal to raise gasoline prices.

This bill is a doozy, even by today’s standards, and we couldn’t believe the news when we saw it. A strict retail gasoline price cap would end gasoline purchases by retail entities once their wholesale gasoline costs approach the retail price cap. Even if imposed for a few weeks, it would drive up prices, encourage hoarding, lead to fuel shortages in the domestic market, and incentivize U.S. refiners to export gasoline they could not sell domestically. .

We would be remiss if we did not also highlight California Governor Gavin Newsom proposal announced on Thursday that the state was to spend $18.1 billion of its budget surplus to send a check for $400 to everyone who owns a car.

The effect of their policies has been to subsidize demand while simultaneously impeding industry’s ability to increase supply. What politicians should is to allow the market to reduce demand and stimulate supply through higher prices. At the same time, they should do everything in their power to increase supply. They need to be upfront about the energy challenges ahead of them, but they need to develop a long-term plan to manage and eventually overcome those challenges. By doing so, they can assure the public that they are looking for realistic long-term solutions. However, if they continue on their current path, they will sow the seeds of a crisis that will lead to their own political demise.

Ultimately, we expect oil and gas to continue to flow from the wellhead to retail sites. Any policy that obstructs this flow is likely to be short-lived, as it will be repealed once its harmful effects are clear. We also believe that US exports will continue uninterrupted, as any prolonged disruption would exacerbate the global energy crisis already underway.

We do not see any risk of intermediate disruptions due to the impact of policies and regulations. The midstream sector will continue to occupy a privileged and low-risk position in the oil value chain for decades to come. Economic growth, population growth and barriers to building new infrastructure will increase the value of existing intermediate assets. We continue to favor a ‘dumbbell’ approach to a middle-income portfolio, with industry stalwarts on one side and collectors and processors on the other.

Our portfolio underperformed its benchmark, the Alerian MLP Index, by 1%. Like the index, it was mowed down by the massive sell-off at the start of the week, then partially recovered on Friday.

Our underperformance was compounded by the 13.6% sell-off in Martin Midstream (MMLP) on no company-specific fundamental information. The company had good news outside of fundamentals, as its chairman, Ruben Martin, bought 45,000 units on Thursday and Friday for a total of $190,850, or $4.24 per unit. MMLP units are down more than 30% from their recent highs. At current levels, we rate them as a “buy”.

EnLink Midstream (ENLC) also hurt our portfolio’s performance, plunging 12.4% without fundamental news. ENLC reported an outstanding first quarter, and we rate its stock as a “buy”.

On the positive side, Western Midstream Partners (WES) and Kinetik (KNTK) gained after reporting strong first quarter results during the week, which we looked at for WES here and for KNTK here.

On Friday, we allocated our first quarter distributions to USD Partners (USDP), as shown here. We believe USDP has attractive growth prospects. In the meantime, we receive an attractive and safe yield of 8.1% to wait for them to unfold. USDP also adds some operational diversification to our portfolio. Its counter-cyclical attributes are particularly attractive given our portfolio’s high weighting in commodity-sensitive collectors and processors.

News of the week

With interim earnings ending, there has been little company-specific news this week.

May 10. Tellurian (TELL) CEO Charif Souki made a podcast appearance to discuss the latest news on TELL’s Driftwood LNG project. The appearance came after TELL decided not to hold a first quarter earnings conference call. In the podcast, Souki said TELL will continue to spend $150 million per year on upstream investments. TELL produces 100 mcf/d, and Souki expects the business to reach 300 mcf/d by the end of 2023. Regarding Driftwood, Souki intends to enter into an agreement with American E&P to raise capital to fund the project. TELL shares remain speculative, with uncertain project financing and significant shareholder dilution a virtual certainty. We’re not fans of TELL, as we struggle to distinguish between its feasible prospects and Souki’s promotional fluff. We’re also not a fan of Souki’s blatant compensation practices.