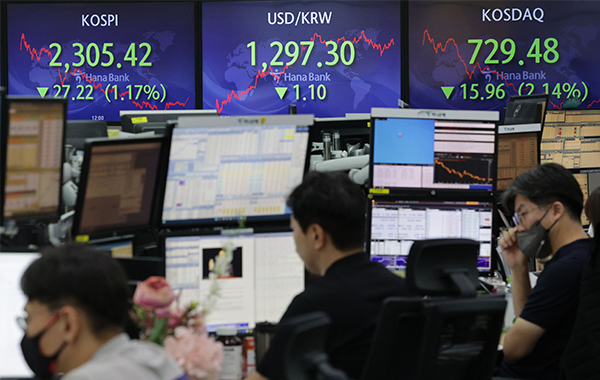 South Korea’s benchmark stock index shed nearly 22% in the first half and could drop another 8% in the second half to hit as low as 2,100 as concerns over the global crisis sparked by inflation weigh on the trade-dependent economy.

The Kospi fell below 2,300 for the first time in 20 months on Friday before closing at 2,305.42. Shares were slightly higher on Monday morning.

As many as 74 on the Kospi and 102 on the Kosdaq renewed their 52-week lows, including the Samsung Electronics and Kakao indicators.

Investment sentiment deteriorated amid growing concerns for the economy heavily dependent on external demand and imports as the trade deficit swelled to more than $10 billion in the first half, the largest on record over a six-month period with high prices of costly imports fueled by weak Korea gained/

“Kospi barely holds the 2,300 mark as concerns grow over Korea’s deteriorating relationship with China, headwinds in the secondary battery industry, increased pressure on the weakening won due to widening trade deficit and uncertainty in the chip industry,” said Lee Kyung-min, chief investment strategist at Daishin Securities.

The Korean market was one of the worst performers and would remain weak in the second half.

No less than 489 trillion won had been wiped from the market capitalization of Kospi and Kosdaq.

Growth stocks like internet and gaming stocks and large chip stocks were hit hard as they were the first to be dumped by foreign investors who exited the market due to faster U.S. rate hikes.

The outlook for the second half is no better.

The Kospi could drop even further if U.S. inflation figures turn out to be higher than expected, said Cho Byung-hyeon, head of investment strategy at Daol Investment & Securities.

By Kim Geum-yi and Lee Eun-joo