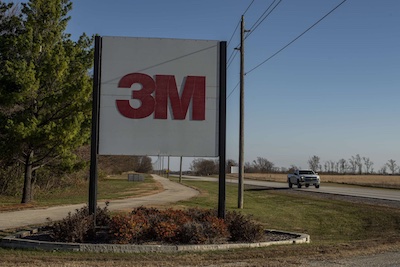 This story is a product of the Mississippi River Basin Ag & Water Desk, an independent editorial network based at the University of Missouri School of Journalism in partnership with Report For America and funded by the Walton Family Foundation. Wisconsin Watch is a member of the network. Sign up for our newsletter and donate to support our fact-checked journalism.

This fall, towns and rural farms along the Mississippi River received alarming news about their drinking water. Chemicals from a large 3M plant north of Cordova, Illinois have found their way into the river and their wells.

The factory employs around 500 people and manufactures the adhesives used in post-it notes, masking tape and other popular products. It also produces a family of chemicals called PFAS, otherwise known as the “forever chemicals,” whose threat to human health has caused growing concern among federal and state environmental agencies.

Water and wastewater sampling by the U.S. Environmental Protection Agency in 2019 detected the chemicals. Now the agency says the drinking water of nearly 300,000 people, including the Quad Cities of Illinois and Iowa, will require further testing to ensure it is safe.

Earlier this month, the EPA announced that PFAS contamination at the 3M plant had created “imminent and substantial endangerment” to public and private drinking water supplies. In a Nov. 2 EPA order, Minnesota-based 3M agreed to investigate PFAS contamination in private wells and public water systems up to 10 miles from the plant.

The situation has left local officials with a dilemma: they want to reassure people about their drinking water, even as they face unanswered questions about health risks and who will pay to clean up contamination.

Municipal officials in Camanche, Iowa, announced in September that municipal water, which serves nearly 4,600 people, tested positive for two of the chemicals above EPA limits.

The city advised residents to contact their health care providers or consider installing home filters. Now, officials are telling water customers that the city is seeking “expert advice” from state and federal officials and will provide more information as it becomes available.

“At this time, we are in a ‘test and wait’ phase on the PFAS issues,” Gaylon Pewe, Camanche’s director of public works, wrote on the city’s website. City officials did not respond to a request for an interview.

Their announcements did not allay the fears of several residents of Camanche, who on social networks reacted with dismay to the latest statement from the city. Is the water drinkable, asked several people.

“If it’s that bad, you know, take the polls and find out what’s going on,” Camanche resident Gary Hopkins, 78, said in an interview. “Then take it to the doctors and scientists and figure out what they can do to stop it.”

The 3M plant has been an integral part of Cordova since the facility opened in 1970. The EPA allows the company to discharge its wastewater into the Mississippi River, but 3M must monitor it for PFAS.

In 2019, 3M informed the agency that it was releasing more chemicals from the factory than previously announced. Testing revealed the presence of at least 60 PFAS analytes in the vicinity.

PFAS, or per- and polyfluoroalkyl substances, are a class of man-made compounds that do not readily break down in the environment and bioaccumulate in organisms. Some are linked to a range of health issues such as altered hormone levels, reduced birth weight, inflammation and digestive ulcers, high cholesterol, high blood pressure during pregnancy, kidney cancers and testicles and reduced efficacy of vaccines in children.

In June, the EPA updated draft health advisories for PFOA and PFOS at levels so low they suggest no amount of PFAS is safe for consumption — a limit to lives of 0.004 parts per trillion and 0.02 ppt of the two compounds, respectively – equivalent to just a few drops in the combined water volume of thousands of swimming pools.

This summer, 3M began testing some of the drinking water near Cordova for PFAS and offered to sample about 190 private wells within a 3-mile radius of the plant. The company then began contacting private well owners to offer to install home water treatment systems, regardless of their sample results.

Under the EPA order, 3M must now offer well sampling to properties within a 4-mile radius of the plant that were not previously included in its scope. Testing can begin after the agency approves a work plan that the company will submit in early December.

During this time, 3M is required to test area public water providers within a 10-mile radius of the plant. An agency spokesperson declined to say what specific action the EPA might take if testing found contamination at those facilities.

The agency also commissioned 3M to develop a special work plan for the town of Camanche, located north of the Cordova, Iowa plant. The plan must include the provision of an alternative drinking water supply or water treatment system.

Grant Thompson, a 3M spokesperson, directed those concerned about the safety of their drinking water to government websites that address “PFAS issues.”

The town of Camanche issued a similar opinion.

Many river communities downstream from the plant have detectable levels of PFAS in their water treatment systems and continue to test for the chemicals.

Charlie Brown, manager of the City of Moline Utilities Laboratory, said PFAS removal is expensive and there are downsides to acting too soon.

Treatment standards are likely to change next year when the EPA announces its final recommendations for four PFAS chemicals, he said. Research into PFAS removal is also likely to provide wastewater treatment plant operators with additional treatment options in the years to come.

Brown said Moline residents contacted him several months ago to ask if they could drink their water.

“Of course the water is safe,” Brown said. “We wouldn’t air it if it wasn’t, and we would let people know.”

“We’ll have to wait and see where the additional funds for the actual treatment come from,” Brown said. “But we don’t want to get ahead of ourselves in treatment until we know what the limits will be (final EPA PFAS) and then what the science will be for treatment.”

3M has faced several lawsuits for the production of PFAS. Outside of Cordova, it has two major US plants that produce the chemicals: in the Twin Cities, Minnesota and in Decatur, Alabama. The state of Minnesota sued the company for mishandling PFAS waste from its Cottage Grove plant, and in 2018 paid $850 million to treat drinking water there. 3M also settled several lawsuits in Alabama last year for $99 million.

Beyond the factories that actually manufacture the chemicals, 3M’s other major legal threat comes from lawsuits over products that use PFAS, such as fire-fighting foam. Thousands of civil cases have been consolidated in federal court in Charleston, South Carolina, and the company now faces lawsuits in California, Pennsylvania and Wisconsin.

David Cwiertny, professor of engineering at the University of Iowa and director of the Center for Health Effects of Environmental Contamination, said if his drinking water tested positive for PFAS, he would install a water treatment system. home, such as carbon filters or reverse osmosis.

“It’s shocking that your water supply is something you don’t immediately trust,” he said. “And even with treatment, a lot of people won’t trust what comes out of their taps, and that trust is hard to regain and rebuild.”

As communities surrounding Cordoba grapple with the difficult cleanup ahead, Cwiertny said, it’s almost certain they won’t be the last.

Linda Vaughn, a retired school bus driver, lives about four miles from the 3M plant on the Illinois side of the river. She already avoids what comes out of her well, but wonders if she will have to do more. Vaughn drinks bottled water, while her husband drinks filtered water from their refrigerator.

“I don’t know if that covers everything,” she said. “I don’t think we’ve had any problems so far. And my husband is 70 years old. I am 70 years old.

Chloe Johnson of the Star Tribune contributed to this story.

Thank you for reading our statewide election coverage this year and for trust MinnPost to provide critical facts and insight into the top issues at play in Minnesota.

Our readers make this work possible – and help us keep it totally free to access. If you counted on MinnPost this election season, would you make a tax-deductible donation of $50 (or any amount!) right now to strengthen our nonprofit newsroom?