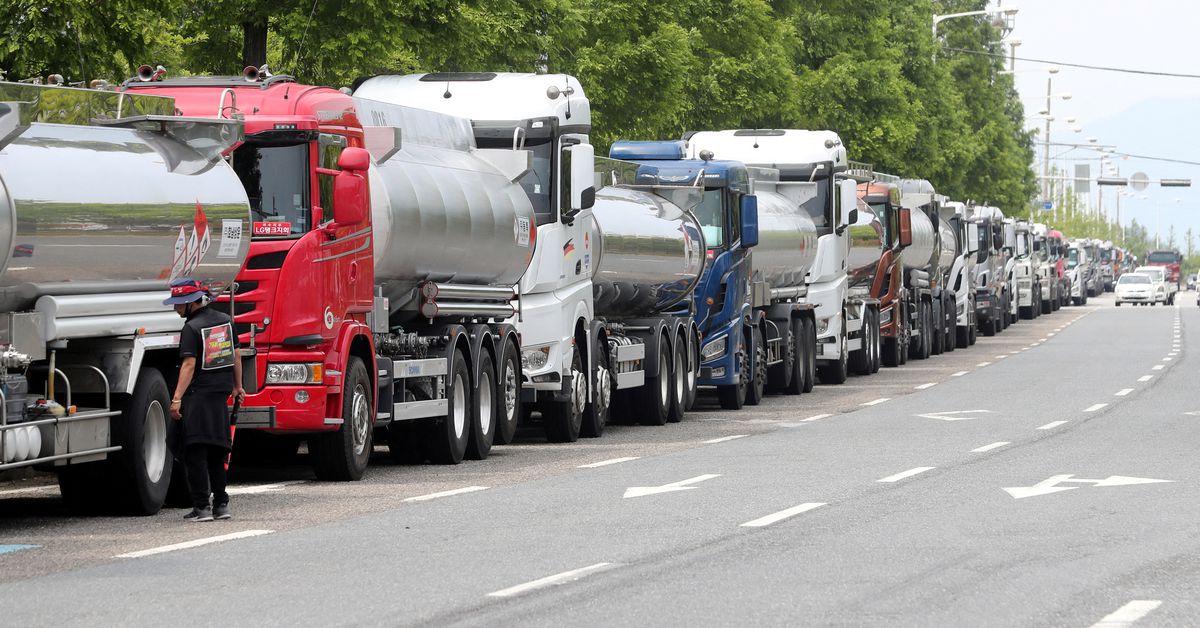 On the fifth day of the strike, around 100 union truckers, about a tenth of Friday’s show of force, gathered at the main gate of the Hyundai factory in the southern city of Ulsan, protesting the surge in fuel prices and demanding higher freight rates to cover costs.

Around 800 striking trade unionists were gathering at the gates of a nearby major petrochemical complex in Ulsan. They had reduced the number of vehicles to a tenth of normal levels on Friday, according to union officials.

The Department of Transport said on Saturday it planned to meet union representatives to continue talks aimed at ending the strike and called on union members to return to work immediately.

At the country’s main seaport in Busan, which handles around 80% of the country’s container movement, traffic had fallen to a third of normal levels on Friday, a government official said.

Around 7,350 truckers, or a third of the 22,000 members of the Cargo Truckers Solidarity union, were due to strike on Saturday, the transport ministry said. The government estimates that about 6% of the country’s 420,000 truckers are unionized.

The union argued that more truckers were on strike and that many non-union truckers are also choosing not to work.

A Hyundai Motor union official said production at Ulsan factories increased slightly in some lines on Friday and the plant was operating at around 60% of its overall capacity, slightly above the 50% to 60% level of Thursday.

Hyundai declined to comment on the status of its operations or the delivery of finished cars.

“There are disruptions in our production due to the truckers’ strike, and we expect production to be normalized as soon as possible,” a Hyundai spokesperson said.

The union official said Saturday’s plant operation had not been scheduled due to worsening parts supply problems, but the company was moving forward, likely to face growing back orders.

Hyundai workers began driving finished cars out of the factory complex and parking those that could not be delivered to customers because the space inside had filled up, he said.

Outside the factory gates and ports, union members waved at approaching vehicles driven by non-union truckers, asking them not to continue but to cooperate with the strike. They weren’t blocking the doors.

The union said the strikers would not stop the trucks from passing through the factory gates and that the police were on the scene.

Reporting by Byungwook Kim in Ulsan and Heekyong Yang in Seoul; Written by Jack Kim; Editing by William Mallard