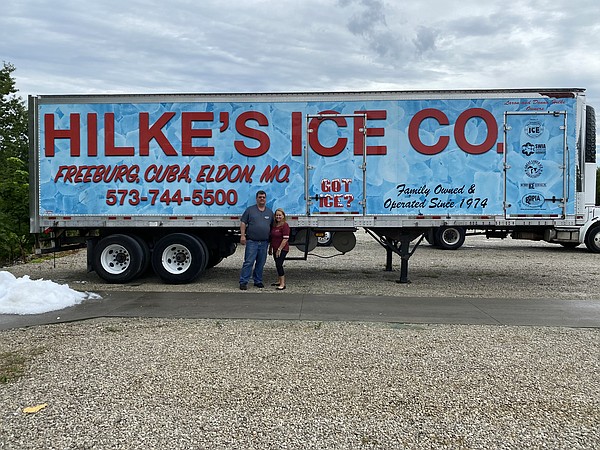 While many are taking advantage of the lower temperatures this week, some local businesses are depending on the warm weather to earn cold cash.

One such company, Hilke’s Ice Co., has a long history in the central Missouri region. Founded in 1974 by John and Marie Hilke, the company has grown into a massive ice cream operation. The business is now owned by John and Marie’s son, Laron, and his wife, Donna.

For Laron Hilke, ice cream is more than just a family business, it’s his family’s legacy.

The ice making process starts with water. Hilke said they get all of their water from the city of Freeburg, which he says has been in the running for the best-tasting Missouri water for the past 10 years.

Freeburg does not treat its water; it comes straight from the well, which Hilke says results in better quality ice cream.

The two larger machines can produce 1,200 to 1,500 pounds of ice every 10 minutes, while the two smaller machines produce 600 pounds every 20 minutes.

The water is turned into ice by a large pump at the Hilke factory, where it is put into a large tank. Machine parts then break the ice into ice cubes that are in Hilke’s ice packs.

After that, the ice cream is ready to be bagged. Ice bags are produced in Mexico City, Missouri. The bags have been the same since 1980, when they were designed by Laron’s mother. He plans to change his bag to celebrate the company’s 50th anniversary.

“I know that’s how she would want it done,” Hilke said.

The bagged ice is manually placed on a pallet by employees and then stored pending delivery. Hilke said this process will soon be automated. The automation equipment was supposed to arrive in April, but was delayed until October or November due to global supply chain issues. No jobs will be lost as a result of automation, he said.

Hilke’s currently has over 50 employees. Staff sizes increase in the summer as demand increases, he said. Some employees are working a partial night shift to meet the current demand for ice.

Staff size decreases by about half in winter. It keeps at least 25 employees on staff at all times.

The original freezer was built in 1988. Hilke said he remembers his parents always saying they would never need another freezer for storage.

All storage freezers stay at 20 degrees to ensure ice cream stays perfectly frozen; 800 tons of ice can be stored between three different facilities.

In addition to the three freezers located in Freeburg, one freezer is located in Cuba, Missouri. Hilke said they plan to install a fifth freezer in the future.

Hilke’s Ice Co. also has a distribution center in Eldon.

“I have a feeling that in the next couple of years I’ll have to install another freezer,” Hilke said.

Hilke’s Ice Co. currently serves over 800 customers within a 120 mile radius of Freeburg. Hilke said their delivery area has expanded a lot over the past five years.

Hilke’s even delivers ice cream out of state. They currently deliver ice to Indiana and Wisconsin. Hilke said he’s shipped to over 25 different states and it’s okay for them to ship out of state during the summer.

Trucks for out-of-state deliveries can hold 21 bagged pallets of ice and stay between freezing and 20 degrees. Hilke said they’ve also delivered a lot of ice this year to various prisons because their ice machines can’t keep up with the excessive heat.

“Block ice is a thing of the past,” Hilke said.

Hilke said most of their sales are to resellers, such as grocery stores, restaurants and bars. Hilke has sold a lot of ice to concrete companies this year because they use ice to lower the temperature of concrete.

“We’re not going to sell to the big boys,” Hilke said. “We will continue like this.”

Hilke said people like to support local businesses, which is one aspect of their success. People also got used to seeing Hilke’s Ice.

“People are used to the name. That blue bag is affiliated with that name. And we’re still a family business,” Hilke said.