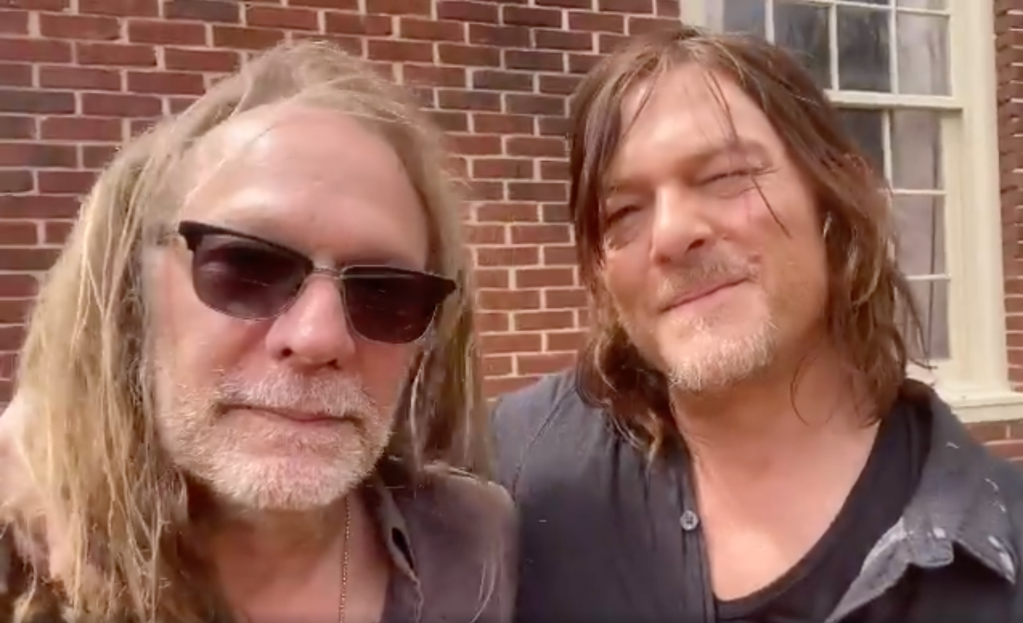 As AMC The Walking Dead Lighthouse wrapped its last day of filming yesterday after 11 seasons, EP Greg Nicotero and star Norman Reedus took to Instagram to reflect on their journey together.

“Come on, man,” Nicotero tells Reedus at the start of the video, “we’re doing the last day video.”

“Twelve years,” the EP says thoughtfully as Reedus puts his arm around Nicotero.

“I love you, mate,” Reedus replies. “Thank you for everything. It has been a real joy.

The two hug and Nicotero asks, “Dude, do you remember when we were babies and we started this show and you had short hair? Do you remember?”

The actor replies, “I feel like my whole brain is shorted out right now. I can’t quite understand that.

‘It’s hard. But in 12 hours, the world will be different,” observes Nicotero.

Reedus replies, “Yeah, I’ll be on the bathroom floor with a teary martini.”

On his personal account, Reedus posted a video of himself and co-star Melissa McBride (in the short hair days) with the note, “It’s over. 11 seasons 12 years. I have never been so beaten and it was an absolute blast. Thanks to all of you who have been on this ride with us and what a ride it has been”

Showrunner Angela Kang posted a video of the exact moment the cast and crew reunited and the show’s end was announced. Cue the confetti, cheers and tears.

Kang also posted a short video loop of herself and star Lauren Cohan and wrote, “Last day of filming on #TheWalkingDead. Thank you to everyone who sent well wishes to those of us working on the show today. It’s been an amazing ride (+ love you, @laurencohan)”

To which Cohan replied, “I love you @angelakkang!”

On her own account, Cohan posted a video of herself toasting with a mug of zombies and wrote, “I don’t have the words right now, but I want to raise my mug to The Walking team. Dead. Thank you. 11 seasons. My heart is full.

Actress Christian Serratos, who plays Rosita on the show, posted a photo gallery and echoed Cohan with, “It’s A Wrap My heart hurts. I love my Walking Dead family con todo. I’m proud of us.

A photo of the clapper board from the final day and the following message appeared on AMC’s Instagram page: “11 seasons, 12 years, 177 episodes, 1 amazing fanbase. Thank you, #TWDFamily for joining us on this journey.

And finally, TWD creator Robert Kirkman and Skybound Entertainment’s David Alpert released a collection of great photos from then and now with the words, “Today is the big day!” The filming of #TheWalkingDead is coming to an end. It’s been an amazing 12 years and we hope all the amazing cast and crew have a fantastic day. #TWDFamily forever!”