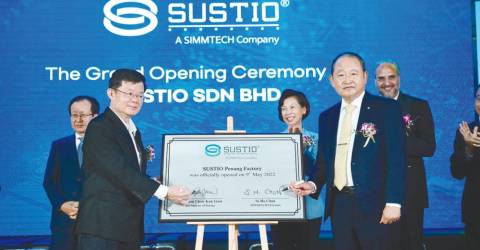 Chun said the 7.3-hectare facility will be the group’s eighth factory along with its other operations in South Korea, China and Japan.

“The Sustio factory in Penang will increase Simmtech’s total substrate and PCB capacity by 20%, which will immediately help to improve the supply constraint situation of the semiconductor industry, which can respond to manner appropriate to the needs of industry players,” he told reporters yesterday.

Chun said the new RM600 million plant at Batu Kawan Industrial Park can produce up to 60 million substrates and 2 million PCBs per month.

“Sustio has already employed a workforce of over 700 people for its Penang plant and it will reach full employment of over 1,000 employees by next year,” he said.

He said the launch of the Sustio factory is just in time for the new dynamic random-access memory (DRAM) technology transition.

“We have already engaged with our key customers for the new site qualification program and we will be accelerating this new site primarily for our DRAM and NAND customers worldwide,” he said.

Simmtech was founded in South Korea in 1987 and had sales of over RM4 billion last year with around 4,000 employees worldwide. – Bernama